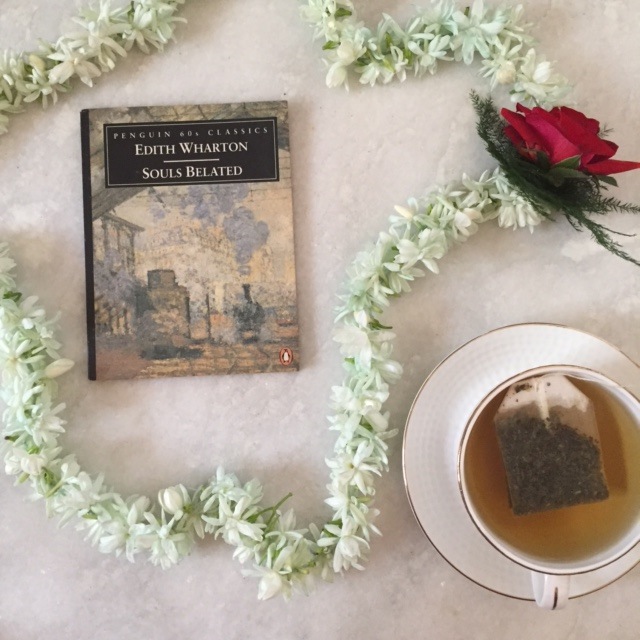 Souls Belated is a short story written by Edith Wharton. It tells of the relationship dynamics between Lydia Tilottson, the wife of a rich New Yorker and Ralph Gannett, a young writer and the man she has left her husband for.

The pair embark on a far-flung sojourn that takes them to the more remote and obscure regions of continental Europe: from Sicily, Dalmatia, Transylvania to Southern Italy. They pass from one country to another, posing as a married couple, shrouding themselves in a web of deceit and false pretenses. They move from one place to another hoping to find a place where they might set down roots and where Gannett might feel inspired to write again.

One day, however, an official letter arrives for Lydia in the post- her divorce papers and matters must come to a head.

The day that the papers arrive the couple are travelling to the Italian Lakes by train. From there, the plan is to secure a secluded spot in the mountains for Gannett to write and for them to be isolated from society.

As the railway compartment gradually empties just beyond Milan, Gannett broaches the subject of marriage to Lydia.

She answers in the most unexpected way, telling him that it is not her wish to marry him, leading him to doubt her regard for him.

Lydia responds: Don’t you see it’s because I care-because I care so much? Oh, Ralph! Can’t you see how it would humiliate me? Try to feel it as a woman would! Don’t you see the misery of being made your wife in this way? If I’d known you as a girl-that would have been a real marriage! But now-this vulgar fraud upon society -and upon a society we despised and laughed at-this sneaking back into a position that we’ve voluntarily forfeited:don’t you see what a cheap compromise it is? We neither believe in the abstract ‘sacredness’ of marriage; we both know that no ceremony is needed to consecrate our love for each other; what object can we have in marrying, except the secret fear of each that the other may escape, or the secret longing to work our way back gradually-oh,very gradually-into the esteem of the people whose conventional morality we have always ridiculed and hated?”

The train brings them at nightfall to an Anglo-American hotel on the brink of an Italian lake. What starts out as a plan to stay a night turns into a more permanent stay. Both of them feel the need to be in a crowded place, so that they may be distracted from their predicament and from each other.

Lydia and Gannett converge into the company of the society that they have scorned for so long- the genteel society of the rich and privileged who stay at the hotel. It is only when the farce of Lydia and Gannett’s false marriage is on the point of being exposed to their companions at the hotel that Lydia must make the decision of whether it is better to stay and marry Gannett, or leave and live an isolated life of her own.

This short story of Wharton’s addresses a number of important issues. The sanctity of marriage, the pressure of society to enter the institution of marriage, the issues of freedom and choice. It is quite a sad tale, very beautifully told, of two souls, very much in love with one another, who have met each other belatedly, at a point in life where marriage is more of a necessity than a joyful choice.

I always wanted to taste whiskey,’ said Miss Pettigrew happily. I’ve never had it, ever, even when I’ve had a cold, as medicine.’

‘Where were you brought up?’ commiserated Michael.

Miss Pettigrew sipped. She pulled a face. She slipped her class surreptitiously on the table.

‘Ugh!’ thought Miss Pettigrew, disappointed. Not what it’s cracked up to be. Why men waste money getting drunk on that, when they can get a really cheap palatable drink like lemon squash …!’

Laughing and thinking about this passage from Winifred Watson’s memorable novel ‘Miss Pettigrew Lives for a Day’ (1938).

I am reviewing this book as part of the #1938club, initiated by Simon David Thomas of Stuck in a Book and Karen of Kaggsy’s Bookish Ramblings. To take a look at other books published in the same year, reviewed by other bloggers, please take a look at this blogpost and this one.

This Persephone Classic, recounts the events of the most remarkable day in the life of Miss Guinevere Pettigrew.  The day starts quite drearily with Miss Pettigrew desperately seeking a job to avoid being thrown out of her abode. Miss Pettigrew is mistakenly sent by the employment agency, to the apartment of young singer and aspiring actress Miss Delysia LaFosse.  Miss Pettigrew thinks she is applying for the post of a governess and Delysia requires a maid to keep her affairs in order.

In the misunderstanding that ensues, Miss Pettigrew exhibits immense presence of mind and efficiency in helping Miss La Fosse out of several scrapes, most of which involve young men. Miss Pettigrew is called upon to save Delysia from several precarious situations. She lies for the first time in her life, is called upon to show some acting skills (something she had not known that she had within her!) and also drink and socialize with Delysia’s group of friends.

For the first time in her life Miss Pettigrew feels needed, loved and competent. She undergoes a metamorphosis so dramatic and sudden that by the end of the day she is hardly the same person who had timidly knocked upon Mis LaFosse’s front door. It is a day that changes Miss Pettigrew’s life and the lives of several people she touches, forever.

Charming and funny and tinged with the naïveté of Miss Pettigrew’s unimpeachable character, it is a story that is laced with the wistfulness and regret of missed chances and opportunities of forgotten youth. However, there is great hopefulness in the novel. Miss Pettigrew reminds me in little subtle ways of Anne in Jane Austen’s Persuasion and she has the matchmaking tendencies of Austen’s Emma, only she is far wiser and manages situations much better.

Miss Pettigrew Lives For A Day is a charming novel. It is book that will invoke giggles. I will most certainly be reaching out for it in a couple of years for a re-read.

There was an error retrieving images from Instagram. An attempt will be remade in a few minutes.