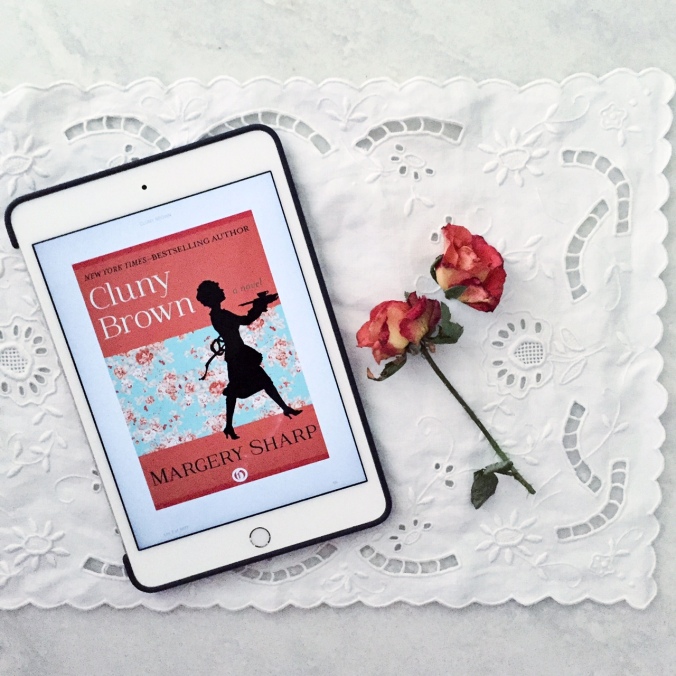 The Charming  and Unusual Story of Cluny Brown

‘Cluny Brown’ by Margery Sharp was just as quirky, just as delightful and just as thoughtful as Sharp’s other books. The book leads us through the life of an unusual girl who prefers to tread down the unconventional path in life.

In the story we are introduced to an orphaned young lady called Cluny Brown. She’s quite an interesting character, memorable, like Sharp’s other protagonists.

But she has one serious fault- she doesn’t seem to know her ‘place’ in the world- at least according to her Uncle, Mr Porritt and her interfering Aunt Addie. Just as an example, she’s been known to have had tea at the Ritz, which according to them, is seen to be vastly above her station.

She works as a phone receptionist of sorts for her plumber-uncle. And though she gets into a few scrapes along the way, things come to a serious head when she actually goes to visit one of her uncle’s clients, tries to fix the plumbing herself, and is discovered in a compromising position by who else than her uncle.

Her Uncle and Aunt Addie decide that enough is enough and Cluny must go into some sort of service and find her own way in the world. And so when the position of a house maid comes up in a respectable, rich household in the country, Cluny is sent on her way without giving her a chance to demur.

It seems Cluny has (according to the employment bureau) all the attributes of the perfect parlour-maid – ‘height, plainness and a perfectly blank expression.’ What they don’t account for is her personality!

So Cluny arrives at the expansive Devonshire estate of Friars Carmel. There’s a Lord Carmel of course, a Lady Carmel, a privileged only son, Andrew, recently down from Cambridge and to provide variety, a Polish man of letters called Adam Belinski, who is seeking cover from the Nazis and a guest of the family.

Cluny arrives at Friars Carmel, quite by chance, in a Rolls-Royce. The gardener fails to pick her up in the station wagon and it is left to kind and neighbourly Colonel Duff-Graham (who is informed by telephone by the station master) who is at the station to pick up his new Labrador to ‘drop anything for Friars Carmel’. He doesn’t really count on dropping home the new parlour-maid but of course he obliges.

Cluny befriends the new Labrador and is invited to take him out on walks on her afternoons off. On these afternoons of sheer freedom she also stumbles upon the local village pharmacist, his cozy dwelling behind the shop and his heartwarming mother.

The pharamacist’s friendship seems to provide Cluny with everything her life has been missing- order, security and companionship. And when Cluny is confronted with making a serious decision in her life, she doesn’t hesitate to make the decision which is right for her.

Why Margery Sharp’s Cluny Brown is so Unique

Margery Sharp’s Cluny is truly memorable. She’s slightly ‘off’ just like Sharp’s Martha of the ‘Martha trilogy ‘ and that makes her totally endearing to me. She doesn’t follow societal norms but does follow her instincts. And if that means that she will never know her place in life, then so be it.

It does make one think: what truly is a person’s place in society? Who decides it? What controls it? How can birth decide a person’s position? Haven’t we seen innumerable examples in history where people have changed their situation through hard work and initiative?

All food for thought.

This blogpost is in honour of Margery Sharp’s birthday hosted by Jane from Beyond Eden Rock.

A big thank you to Open Road Media for kindly sending me an e-book of Cluny Brown. As always , all opinions regarding the book are entirely my own.