Give me a story set in an English village, inundated with curious characters and gentle descriptions of nature and musings about life- and you have me sold. Here in no particular order are some of my most favorite books set in rural idylls. I go to them, for comfort…

1) One Fine Day by Mollie Panter-Downes

This is the story of a day in the life of a woman, set in the small coastal English village of Wealding. In the aftermath of the Second World War the English middle class are struggling to come to terms with their new life, less dependent on domestic help and trying to let go of the grandeur of the old days. This is a quiet contemplative novel which captures the beauty of the location. Despite not having much plot the story conveys a sense of longing and melancholy hard to capture in words.

Dora Jessie Saint who wrote under the pen name of Miss Read captured the bucolic beauty of Cotswold villages and penned wonderfully human, simple stories that conveyed a sense of calm and goodwill. Tinged with a wry wit and the most wonderful characters, Miss Read’s ‘Fairacre‘ and ‘Thrush Green’ series are the height of comfort reading.

Tolstoy freely admitted that one of the influences in his writing were the novels of Victorian author Anthony Trollope. One of Trollope’s most famous series are the Barchester Chronicles– a set of six books set in the fictional rural county of Barsetshire. Apart from writing about nature and characters set in small towns and villages, Trollope wrote remarkably about money, social prejudice, politics and women with the most humane touch.

4) If Only They Could Talk by James Herriot

James Alfred Wight wrote semi-autobiographical novels under the name of James Herriot. A veterinary surgeon, he wrote about his work and personal life in the rolling hills and dales of Yorkshire. Though the work was often back breaking and hard, Herriot’s love for the location and the Yorkshire people freely emanate from each page. His books are a sheer delight.

5) Portrait of Elmbury by John Moore

Portrait of Elmbury published by Slightly Foxed is the first book in the rural trilogy, recounting the history of a small market town in England, named Elmbury. In this first book, the author John Moore describes his childhood and youth in the market village. How the village was hit by the aftermath of war, the poverty and declining conditions of the Depression era. The rural descriptions are particularly evocative of time and place.

Freely borrowing from Trollope’s fictional county of Barsetshire, nearly a century later Angela Thirkell wrote a long series of loosely linked novels that mapped the social history of a generation destabilized by the Second World War. Thirkell’s books are light and frothy but they capture a slice of history that is interesting to witness as a reader.

Though some of Gaskell’s works are set in the city and beautifully depict the Industrial Revolution of Victorian times, Cranford is set in a rural location. The small country town of Cranford supposedly corresponds to Knutsford in Cheshire. Small country customs and the portrayal of wonderful human characters cover the scope of this novel.

Miss Buncle’s Book is delightful not only due to the unique plot but also the brilliant cast of characters set in a small country village. 30 something unmarried Barbara Buncle resorts to novel writing as a source of income. As she has no imagination whatsoever her book draws heavily upon the characters and incidents occurring in her village. And when the villagers discover the book and their own unmistakable, unflattering portrayal they are determined to hunt down the secret author.

9)A Month in the Country by JL Carr

In this story a young war veteran seeks occupation in the form of the restoration of a church mural in a sleepy, English village. Recovering from shell shock, the restoration of the religious mural is accompanied by the artist’s own reparation of spirit and sense of well being.

10) Swallows and Amazons by Arthur Ransome

Sailing holidays in the English Lake District, hunting for stolen treasure and camping on deserted islands- Ransome’s books abound with the charm of a time that was much safer and secure. The descriptions of the lake country will simply mesmerize you.

Elizabeth and Her German Garden by Elizabeth Von Arnim, Illyrian Spring by Ann Bridge, Nightingale Wood by Stella Gibbons receive honourable mentions. Before I finish it would be remiss of me to omit the works of Thomas Hardy- the ultimate guru of pastoral literature.

Books that I intend to add to this list are George Eliot’s Middlemarch and the novels of Tolstoy. Let me know of your favourite books set in rural locations. I’d love to hear about them. 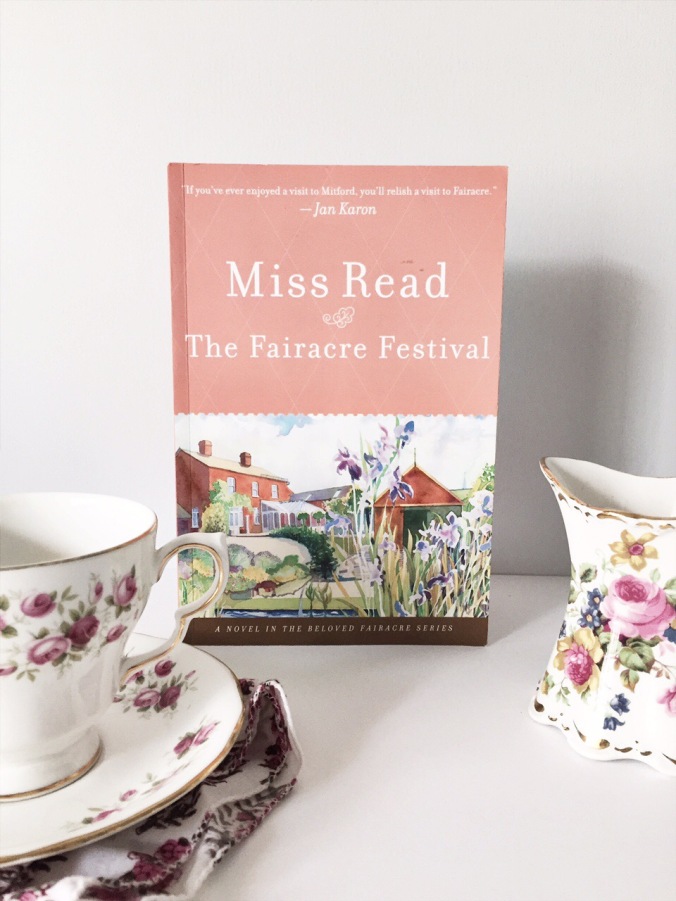 On a stormy night in October, calamity strikes the placid, Cotswold village of Fairacre. High winds fell some ancient elm trees, which in turn damage the roof of St. Patrick’s Church.

The entire village, especially the vicar Mr Partridge, witness the damage done to their beloved church in the aftermath of the storm. Estimates to repair the roof and restore the church to its former glory, come in at the huge sum of two thousand pounds.

Even the most optimistic villager can foresee that innumerable jumble sales, weekly raffles and whist drives will not be able to meet that amount.

An emergency meeting of the Parochial Church Council is called, at which Mr Willett, the church sexton, comes up with the marvellous idea of hosting a Fairacre Festival in the summer- a sort of Edinburgh Festival on a smaller scale.

A number of smaller events like a fête, a jumble sale, whist drives, bingo and dances are planned around the main event- a Son et Lumiére with St. Patrick’s as the backdrop. A famous opera singer, Jean Cole’s performance is added to the roster of events, but will these collected efforts be enough to raise the entire sum of money or will the village’s Queen Anne’s reign silver chalice have to be sold to save the roof?

As usual, this is a slow, quiet, amusing book that has some lovely moments. The stories though very simple have an underlying message. This book emphasizes the importance of community and the strength of collective endeavour to achieve a single purpose.

The more I read of Miss Read, the greater appreciation I develop for her knack of appreciating the small things in life and imparting wit to small everyday instances.