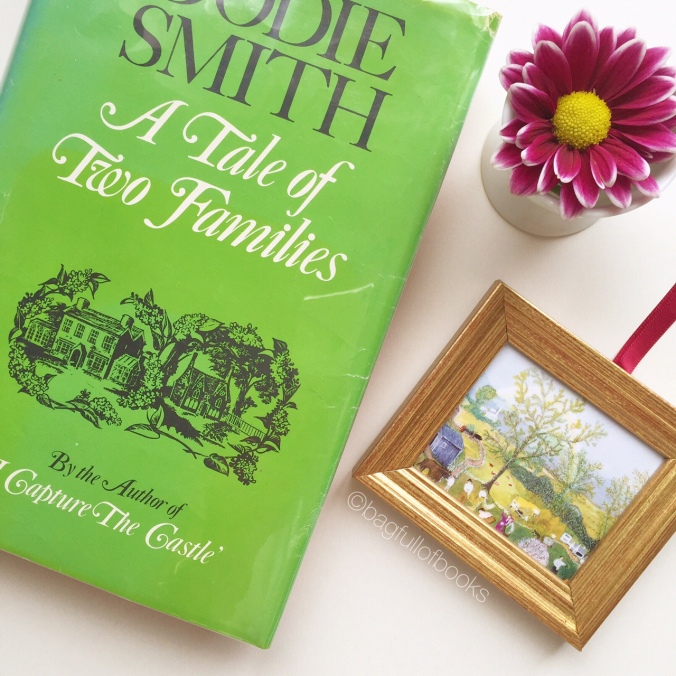 ‘A Tale of Two Families’ by Dodie Smith is the story of the relationship between two families: those of May and June, two sisters, who marry two brothers, George and Robert. When May and George decide to relocate to the countryside for a few years, on a landed estate with a small cottage, it seems the most natural thing for June and Robert to leave their father’s house and set up home in the cottage on May and George’s leased estate. Robert, a skilled but lesser known writer plans on writing his magnum opus in the idyllic surrounds of the cottage. June is happy to be carefree and close to her sister. Robert and George’s father, Baggy, comes to stay with George’s family. May and June’s delightful mother, Fran, decides to stay with her two daughters for a while. The children in the family come upto the property on weekends, from London or the boarding schools they go to and a good time is had by all in the family. Then the close proximity leads to unforeseen events…

The reason for the move is in one way precipitated by May’s need to distance herself from George’s philandering ways in London. George, is a successful businessman in London. He commutes to his workplace by the train. The two sets of adults in the family along with Baggy, settle into a routine. George leaves early in the morning. May, ever the dutiful wife, gives him an early breakfast and he pops off to work on the train. May is busy with various household activities during the day. Robert, potters about the garden and keeps planning his novel in his attic study in the cottage. June is blissfully happy to be in the countryside, so near her sister and George. Quite disturbingly, we learn of June’s secret infatuation for George, a fact that she conceals quite well. George, returns home from work every evening laden with gifts for household members. The couples frequently dine together or George visits the cottage to watch television together in the evenings.

Baggy, the boys’ father feels a little isolated in his small wing of the house. Despite the fine food and company, he misses his home in London, which he had shared with Robert and June. Though May, spoils everyone with her beautifully cooked meals, she lacks the warmth that June had. Baggy also misses his old routine, nightly soaks in his bathtub with his granddaughter’s bath toys! This loneliness is somewhat abated when Fran, the girl’s mother comes to visit. Though Fran Graham is in her seventies she retains her youthfulness, both in spirit and in appearance. When she arrives at the country house by  a taxi, she is mistaken for a young girl by her grandchildren and Baggy.

‘Hello, here’s a taxi. Some girl appears to be arriving.’

Dickon, joining him said, ‘That’s no girl. That’s my grandmother.’

‘Fran does have a girlish figure,’said Prue, then raced after Dickon who was already on his way to the front door.

The family group is complete and a period of great contentment sets in. The lilac bushes on the estate are in full bloom. Nightingales can be heard in the dead of the night.

‘Heavens, how lucky we are,’ said June. ‘Lilac and a nightingale! And there’s a marvelous laburnum coming out near the cottage- and a may tree.’

‘”The lilac, the laburnum and the may”,’ said Robert.’I’m sure that’s a quotation…

They were back at the cottage now. Robert’s torch shone on a drift of cow parsley, left on the edge of the lawn.

‘”Where the cow parsley skirts the hawthorn hedge”,’said Fran.’And I do know who wrote that: Rossetti, the most loved poet of my girlhood.’

This idyllic period is disrupted when Fran’s sister, Aunt Mildred, or ‘Mildew’ as she is jokingly referred to, comes to stay. Aunt Mildred, creates a toxic environment within the household, owing to her childish ways and her overactive imagination which leads to events that have irrevocable consequences.

‘A Tale of Two Families’ arrested my attention till the last page. It had sublime, romantic moments filled with poetry and nature but it didn’t relapse into a completely cozy novel due to the great sexual tension, Dodie Smith developed in the novel.

It is a book I enjoyed reading and will, no doubt, re-read in the future. It is, to echo Dickens, a story about two families, in the best of times and worst of times.

Two poetry references in the book prompted the #poetrymatchart tag on Instagram. The first reference is to a poem by Charles Mackay, the second a poem by Dante Gabriel Rossetti.

I am inserting the posts below.

"I have lived and I have loved;  I have waked and I have slept;  I have sung and I have danced;  I have smiled and I have wept;  I have won and wasted treasure;  I have had my fill of pleasure;  And all these things were weariness,  And some of them were dreariness;– And all these things, but two things,  Were emptiness and pain:  And Love–it was the best of them;  And Sleep–worth all the rest of them,  Worth everything but Love to my spirit and my brain.  But still my friend, O Slumber,  Till my days complete their number,  For Love shall never, never return to me again!" by Charles Mackay Painting – The Long Sleep by Briton Riviere. Last night, while reading Dodie Smith's 'A Tale of Two Families' I came across a reference to this wonderful poem by Charles Mackay. Isn't it lovely?Another tag is being started- #poetrymatchart. I am tagging a few people whom I think might like to do or appreciate this tag. A very happy Monday to all!

"Your hands lie open in the long fresh grass,– The finger-points look through like rosy blooms: Your eyes smile peace. The pasture gleams and glooms 'Neath billowing skies that scatter and amass. All round our nest, far as the eye can pass, Are golden kingcup-fields with silver edge Where the cow-parsley skirts the hawthorn-hedge. 'Tis visible silence, still as the hour-glass. Deep in the sun-searched growths the dragon-fly Hangs like a blue thread loosened from the sky:– So this wing'd hour is dropt to us from above. Oh! clasp we to our hearts, for deathless dower, This close-companioned inarticulate hour When twofold silence was the song of love." Silent Noon by Dante Gabriel Rossetti Painting by Alfred Sisley Meadow , 1875. #poetrymatchart I came across the reference to this nice poem in a book recently – A Tale of Two Families -by Dodie Smith. How lovely is the line 'Where the cow-parsley skirts the hawthorne-hedge' ? Wish everyone a happy Thursday!