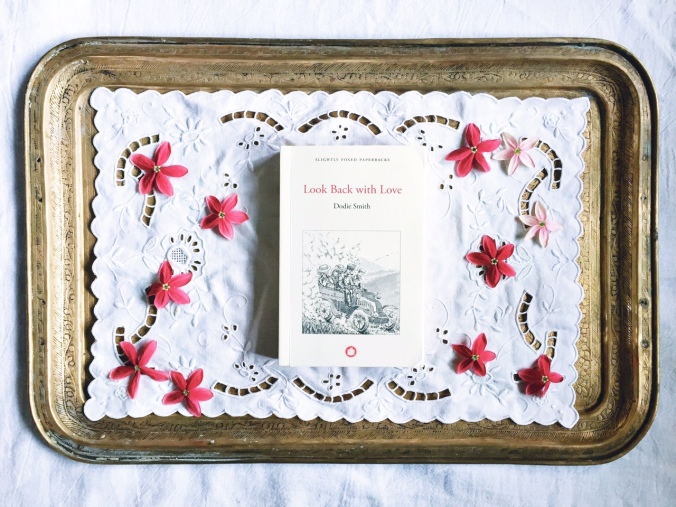 ‘Look Back With Love’ is the author Dodie Smith’s childhood chronicle of an Edwardian upbringing in the city of Manchester.

Young Dodie Smith lost her father when she was an infant and was brought up by her mother and a doting household of maternal grandparents, aunts and uncles. Her rather precocious nature was precipitated by her being the only child in a large family of adults.

We track Dodie’s childhood from a young age to the onset of her teenage years, when her mother married a long-time fiancee and moved to London. The decade that Dodie Smith recounts is filled with the most delightful details of how the Furber family (Dodie’s mother’s family name) lived.

It was by no means a privileged existence, but there was no dearth of merriment and entertainment to be had in the Furber household. The first house where they lived and which Dodie could remember perfectly, Kingston House, is described as

…a house with four sitting-rooms and three pianos.

It was located near Old Trafford, then a Manchester suburb. The main inhabitants of the household were Dodie’s grandparents, her uncles Harold, Arthur and Eddie; her aunts Madge and Bertha and Dodie and her mother.The house and rooms are described with delightful detail. One can tell that here lies a household who take great pleasure in making a house their home despite not being blessed by wealth. The description of the kitchen delighted me. It reminded me ever so slightly of Cassandra’s nighttime baths in the kitchen in ‘I Capture the Castle’.

Next to the morning-room was the very large kitchen, with two tall dressers, a long row of iron bells, and a vast kitchen range with a glowing fire in front of which, in our early days at Kingston House, I had my nightly bath. Above me hung the family washing, on a wooden rock that could be pulled up to the ceiling.

In fact most of the characters in Dodie’s family are so distinctive and quirky they might have jumped off the pages of one of her books. Her mother Ella, was petite with a penchant for delicate, elegant dresses. Not well-educated she was well read and enjoyed Hardy, the Brontes and Rider Haggard among others. Her grandmother played the piano beautifully and her eldest Uncle Harold was a brilliant amateur theatre actor. Her Uncle Arthur had a weakness for patent medicine, claimed to have a weak digestion and thrived on toasted cheese. Dodie’s Aunt Bertha was also an eccentric character who could not tell her left hand from her right unless she hopped, and who insisted that if she were left alone for more than three hours her teeth went soft!

The family had known prosperous times until Dodie’s grandfather, the secretary of a large chemical firm lost his job when the company was run to the ground. He then embarked on a number of jobs and was not successful at either of them. He tried his hand at farming, running a public house, a shop and several other projects that were never mentioned in the house. Once the uncles started working, things came to an even keel although from the descriptions provided there was never an excess of money and the family made the best of what they had.

The family were very good at creating diversions and entertainment for themselves. One of their favourite places to visit on the weekend was Old Trafford Botanical Gardens.

To wear a white muslin dress and bonnet and my best white doe-skin shoes, and to wander hand-in-hand with two straw-hatted uncles over the sunlit lawns, while the band played Valse Bleu, was the essence of high holiday.

Those Edwardian days were the kind where a stray sixpence found by Dodie and her friend in the  Gardens would yield four ounces of sweets for a penny and a luxurious cab ride home for the young pair for three pence.

Other sources of entertainment included musical soirees at home, where members of the family would sing, play musical instruments or recite. The family were also avid theatre goers and Uncle Harold’s involvement with amateur dramatics would pave the path to Dodie’s future career aspirations on the stage.

The book is peppered with very funny anecdotes like the case of one of Dodie’s classmates being an avid ink drinker and Dodie’s candid comments about her mother’s changing fiancees. But underneath the gaiety and merriment, the author reveals her personal childhood angst.

Perhaps the traces of her unhappiness rooted from her heightened sensitivity which would later lend to her creativity as a writer and artist. Her increased levels of empathy made it impossible for her to accept the suffering of living animals and creatures. She was never even able to kill the most rampant mosquito. She was also filled with a great degree of introspection and moral consciousness which also contributed to her unhappiness.

If you like me, loved reading Dodie Smith’s classic novel ‘I Capture the Castle’ you will realize, upon reading this memoir that Cassandra is to some extent Dodie Smith. They feel one and the same. Besides providing a detailed historical description of life and times in the Edwardian age, this bookish memoir is an intimate glance at the person who created a veritable body of literature. The anecdotes are splendid and unique. I cannot recommend this memoir enough and I hope to read later episodes in her life history.

I received a review copy of ‘Look Back With Love’ from Slightly Foxed, but as always all opinions are my very own.

2 thoughts on “Look Back With Love by Dodie Smith”