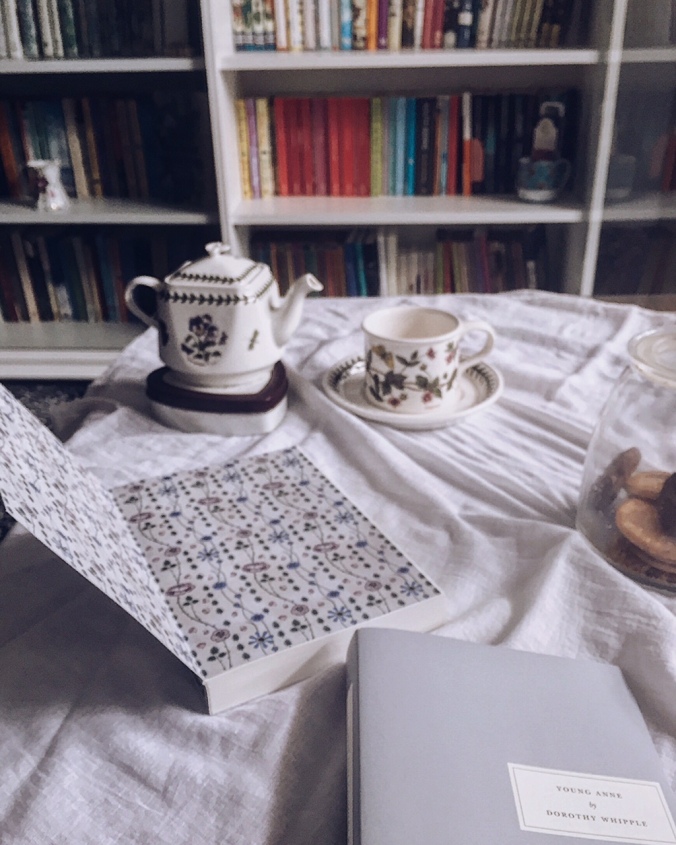 ‘Young Anne’ is the eighth and final Dorothy Whipple novel to be published by Persephone Books but in the grand chronology of things, is Whipple’s first and most autobiographical novel.

It is set in the years leading up to the First World War and follows the life and growth of Anne Pritchard, youngest child of a middle-class, Lancastrian family. The ‘Young’ in ‘Young Anne’ not only refers to the tender age of the female protagonist, it also helps to emphasize the extreme naïveté of Anne Pritchard, the mistakes that youth often make and the consequences of immature decision making on adult life.

Anne is the daughter of Henry and Olive Pritchard. They have two other children- Gerald, the eldest and the apple of his father’s eye and the quiet, forgettable middle child- Philip. Henry Pritchard is an unforgiving, strict disciplinarian and his wife Olive is infuriatingly detached from her family. The only person who shows little Anne any love is the long-time maid of the family, Emily.

Anne is a curious, vivacious child, always getting into scrapes much to the consternation of her father. On one occasion she invokes the wrath of her father to such a great extent that she is sent as a day-boarder to the local Catholic school, even though their values do not meet that of the Pritchard families. Anne, blunders her way through school. She does quite well in her studies and manages to leave school with a first in English.

Anne is close friends with Mildred Yates, the Yates being a rich family involved in the cotton industry. George Yates is Mildred’s poor cousin and has been educated relying on the aegis of his rich Uncle, Mildred’s father.

George and Anne’s paths intertwine in their childhood and as two youth, on the brink of adulthood, they meet again and fall in love. Without giving too much of the plot away, the book deals with the unusual relationship that Anne and George have, how their paths continually intersect and diverge from one another. Young love is full of misunderstandings and the pair certainly seem to have a star crossed fate.

Towards the end of the novel, Anne, no longer armed with the excuse of youth and naïveté has an important decision to make: to follow her heart or to listen to the voice of reason and convention for the first time in her life.

The scope of ‘Young Anne’ unlike many of Whipple’s other novels is smaller. It lacks the sexual tension of ‘Someone at a Distance’ or the violence of ‘They Were Sisters’ or even the large country house setting of ‘The Priory’. What it does manage to convey is the immaturity of youth, especially of those growing up in a constrained, repressed society. It also manages to convey the beauty and purity of first love.

Anne and George’s early romance is sweet, heady and intoxicating. The writing is beautiful. Whipple creates dreamy, rural scenes and these chapters are some of my most favourite in the book.

Whipple is brilliant at dispelling the magic of life, especially the feeling of security and complacency that comes with a protected childhood, with a single unnerving incident. In ways she reminds one of Katherine Mansfield.

Life, like a cross nurse, had slapped her hands away from every thing she had held, and she was like a child sitting on the floor, blank, bewildered, uncomprehending.

Such events, frequently occur in Anne’s life and she is ill-equipped to tackle them. ‘Young Anne’ is a memorable coming of age novel. The characters are flawed, the situations created in the novel are perverse, and like all of Whipple’s most excellent creations, we are on the edge of our seats to find out what happens next.

I received a review copy of Dorothy Whipple’s ‘Young Anne’ from Persephone Books but as always, all thoughts and opinions are entirely my own.