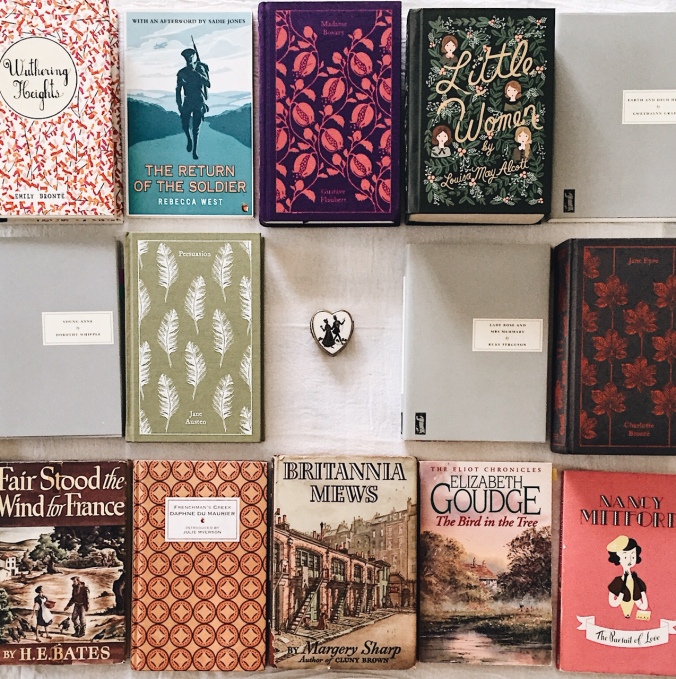 While the present-day commercialization of Valentine’s Day might not be up everybody’s street (I must admit – it can be a little too much for me now that I’m heading into my dotage), there are many of us who won’t say no to a good love story.

A good love story, that of the epic kind, can leave us in a thrall of emotion- having us reeling from its heady effects. In fact, when I finished reading one of my favourite love stories, ‘North and South’ (omitted from this list due to having lost personal copy), I was in a state of acute sadness, which I later classified as a ‘bookish hangover’.

The emotion of love has been portrayed by writers in innumerable ways, in the most differential situations.

The sweet intoxication of first love, the poignancy of love lost, the illicit pleasure of forbidden love- all have been written about by the greatest of writers.

Here, in no particular order are some ‘lovely’ books that will make your Valentine’s Day reading, hopefully more fulfilling:

The epic tale of a savage love between Heathcliffe and Catherine is definitely one not to be forgotten. Set against the wild backdrop of the Yorkshire moors, one feels the intense emotions felt by the characters to be mirrored in the harsh landscape.

2) The Return of the Soldier by Rebecca West

Return of the Soldier’ by Rebecca West is about a Great War veteran who has returned from the trenches suffering from shell-shock.

His amnesia prevents him from remembering his wife of ten years, with whom he has loved and lost a small child.

To the dismay and disgust of his wife Kitty, the one person he can remember is his sweetheart from fifteen years ago- Margaret, with whom he has a very romantic history. She was then, a young, simple girl, a poor inn-keeper’s daughter, of little sophistication.

Christopher and Margaret meet again and rekindle their relationship at Christopher’s behest but Kitty is anxious for her husband to meet a doctor and be treated for his lapse of memory.

It is left to Margaret, with her superior understanding of Christopher’s mind (in-fact the perfect soul mate) to trigger an emotion that will bring about the return of the soldier in both the physical and emotional states.

This is a story about love and sacrifice and is also an exploration of the relative strengths of different human relationships.

I’m currently reading Flaubert’s tale of a country doctor’s wife who will do anything to provide relief from her life of boredom in a French provincial town. I believe the story is packed with passion and turned more than a few eyebrows when first published.

Who can forget the unrequited love story between teenage Laurie and Jo March? Despite Jo’s rejection for the young Lawrence boy, one can’t help but wonder why Jo and Laurie wouldn’t have made a good pair.

Earth and High Heaven’ is the love story of Marc Reiser and Erica Drake, set against the social and political backdrop of a segregated Montreal, in the midst of the turmoil of the Second World War.

The social milieu of Montreal is very important in the context of the story. Montreal, at the time, consisted of a majority of English Canadians (the Drakes) and a minority of French Canadians and Canadian Jews (the Reisers). ‘Earth and High Heaven’ is a very elaborate social commentary on racial prejudice. It shows how people born into a fixed social pattern can overcome centuries of difference, in an overwhelming desire to embrace the most unifying emotion of all- love.

‘Young Anne’ is set in the years leading up to the First World War and follows the life and growth of Anne Pritchard, youngest child of a middle-class, Lancastrian family. The ‘Young’ in ‘Young Anne’ not only refers to the tender age of the female protagonist, it also helps to emphasize the extreme naïveté of Anne Pritchard, the mistakes in love that youth often make and the consequences of immature decision making on adult life.

There are some dreamy scenes in the middle of the book that capture the heady romance that first love can bring.

As opposed to dealing with the theme of young love, Austen’s ‘Persuasion’ is an interesting story about love that has been lost in youth and the listlessness that a loveless life can bring. Anne Eliot’s feelings of being thwarted and rejected are so very poignant that they make the reader weep internally for her.

Lady Rose leads a life of great privilege but it is largely bereft of love. Her parents neglect her, her first husband marries her for her money and title. So when she meets the love of her life in a commoner, on a park bench in Edinburgh, she has a momentous decision to make. Should she follow the dictates of social etiquette or shun society, follow her heart and thus lose all she holds dear?

This gothic romance is so swept with passion that it reminds us, that the Bronte sisters could write with great passion, revealing a depth of emotion that is quite contradictory to the dictates of the staid Victorian Age.

The fiery love story between Rochester and Jane are one of the reasons that this book remains a popular classic, to this day.

10) Fair Stood the Wind for France by HE Bates

Fair Stood the Wind for France’ by H E Bates is a war time work of fiction that deals with the story of a group of British airmen, who are compelled to make a forced landing in occupied France and have to take refuge in the home of a kind French family, who risk all they hold dear to help the men.

In particular it is the beautiful story of the love and trust that grows between the injured head flight pilot and the daughter of the French family.

Fair Stood the Wind for France was poignant, a World War Two story about love and trust and loss on an epic scale.

If dashing, swashbuckling pirates who smoke tobacco and bored ladies of the English nobility, teaming up and going on daring Robin Hood-like adventures around the Cornish coastline are your thing, then you will most definitely enjoy du Maurier’s ‘Frenchman’s Creek’. It may be just a little too romantic and unrealistic for some- but on Valentine’s Day- why hold back?

Britannia Mews’ is a book that describes the life and times of Adelaide Culver, a child of privileged circumstances, living in one of the row of houses along London’s Albion Place. Adjacent to Albion Place, stands Britannia Mews, once a stable, housing the horses used by the genteel folk living in Albion Place but now reduced to a slum at the turn of the nineteenth century.

Adelaide falls in love with her art teacher and aspiring artist, Henry Lambert and throwing all caution to the winds, elopes with him, to live a life of severely reduced circumstances and drudgery in a small house in Britannia Mews. In the beginning, Adelaide is happy with her new found independence, the novelty of keeping her tiny house spick and span and the belief that Henry will make a name for himself in art circles.  Slowly, however, she is resigned to the fact that Henry is a drunk and will never make a name for himself. The book deals with how Adelaide resurrects her life in the wake of her husband’s accidental death and how love comes to visit her life again.

13) The Bird in the Tree by Elizabeth Goudge

Published in 1940, The Bird in the Tree, is the first in a trio of novels – collectively called the Eliot Chronicles. The Eliots are a large family and their story is as intricate and detailed as most familial tales.

Without giving too much of the plot away – the book is a gentle dialogue on the tousle men and women have of choosing between personal gratification gained from love or making choices that benefit family and future generations.

14) The Pursuit of Love by Nancy Mitford

The last book in our tribute to Valentines Day is Mitford’s ‘The Pursuit of Love’.

The Pursuit of Love by Nancy Mitford is her fifth novel published in 1945. It is the first novel in a trilogy of which Love in a Cold Climate and Don’t Tell Alfred form a part. The Pursuit of Love was the first novel that brought Mitford popularity and is semi-autobiographical. The time frame of the story is set in between the two world wars. The threat of impending war and its repercussions play a major role in the unfolding of the story. However, at the heart of the tale is the story of a young woman’s lifelong quest to find love.

Do you have any recommendations that should be added to our Valentine’s Book List? Please do share.