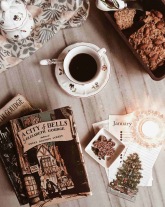 January was a month of new beginnings. On the work front I had new things to learn and new projects to embark on and they kept me very (pleasantly) busy. I was also craving good book discussions and participated in two readalongs on Instagram. One – was ‘A Winter Away’ by Elizabeth Fair. I read this with a close group of friends and the book was light and it was amusing to share excerpts and peculiarities of character, whilst reading.

The second book I read with the Elizabeth Goudge Book Club on Instagram – ‘A City of Bells’. I had this beautiful first edition sitting on my bookshelf – just crying out to be read. I enjoyed this book so much.

We had two birthdays in the family – my daughter’s and my Mum’s. I bought Amitava Ghosh’s ‘Gun Island’ for my mum because she is a huge fan.

Mid-January, the husband and I had four nights of attending Dover Lane Music Conference – an Indian classical musical soirée in Kolkata. Two nights, we stayed up all night and walked home as the sky was turning pink at dawn. There is nothing so uplifting as music and is so needed to lift one’s spirits. I’ll think of the good music I listened to and it will make me happy when I remember it throughout the remainder of the year.

The weather has been unseasonably cold in Kolkata. That, and perhaps the new flat is rather chilly! Whatever the reason – I finally caved and bought a space heater. We celebrated Republic Day with Subway Chicken Tikka sandwiches and Dutch chocolate ice-cream. There was a holiday deal. Sandwiches are the highpoint of our (Meli and my) fast-food life!

Meli spent most of January practicing for Sports Day at her school. She is reading aloud ‘Little House on the Prairie’ to her grandmother, who is visiting at the moment.

I hope you all had a good start to the New Year.

This is my month in review :

The Books I read in January

1) ‘A City of Bells’ by Elizabeth Goudge

I read ‘A City of Bells’ with the Elizabeth Goudge Book Club on Instagram. The lady who hosts the readalong accompanies the books with wonderful images taken from the scenes of the book… in this case the city of Wells, England. This definitely helps to make the book come alive.

’A City of Bells’ was such a charming book. Very well written, a nice plot that was engaging to the last and a host of very endearing characters. And the best of all! The story contained a quaint little bookshop. How can a bibliophile not love a book with a bookstore in it? More on the book later… as I hope to review it in depth.

2) ‘The Prime Minister’ by Anthony Trollope

I’ve been listening to Trollope’s ‘The Prime Minister’ on audible for a few months now. I finally managed to finish the book in January and enjoyed it overall. I think the fact that the central character had a very dislikeable personality deterred me from listening to the book. Sometimes, his vices and personality got too much for me. The book is the fourth in Trollope’s famous ‘Palliser Chronicles’. The most important themes in the book were politics and a greed to make easy money.

3) ‘A Winter Away’ by Elizabeth Fair

I read ‘The New Chalet School’ in an Armada paperback version and it is abruptly cut short at the end. I will have to search for the next Armada book ‘A United Chalet School’ where the story continues to satisfactorily resolve the story. Next month I will pick the most momentous book in the series – ‘The Chalet School in Exile’ and I have an unabridged Girls Gone By Publishing edition that contains the missing chapters of the Armada editions. As ‘Exile’ is my favourite book in the series, I am VERY excited to proceed.

I didn’t watch much television at all in January but did manage to watch a few episodes of ‘The Crown’ on Netflix. Particularly haunting, was the tragedy that befalls a Welsh mining town. Meli and my Mum are re watching episodes of ‘Anne with an E’. I hope to catch up with the newly released third season soon.

I was ever so hopeful that the ‘Little Women’ movie would come to theatres in Kolkata but it hasn’t and I’m still hopeful and waiting!…

Meli and I have discovered Maroon Five’s ‘Memories’. Quite distressingly, Meli has also picked up the lyrics which might not be the most appropriate for an eight year old …

I listened to the Slightly Foxed podcast. Episodes that I enjoyed included Episode 13 (Nature and Story) and Episode 14 (The Vital Spark). The latter was a very engrossing discussion on what sparks a lifelong love of reading. This is a topic very much after my own heart as I take great efforts to encourage Meli to read.

The husband and I spent four very lovely evenings (and in two instances whole nights) at the 68th Dover Lane Music Conference in Kolkata. It’s an Indian classical music conference held every year in our city and I attended the event after many years. My favourites were a Double Violin recital by L Shenkar and a vocal recital from Ustad Rashid Khan.

What I Made in January

I made a delicious chocolate banana almond bread in January. Although we enjoyed it, I still found it on the dry side and will be tweaking the recipe further.

I also baked a chocolate layer cake with coffee chocolate icing for Meli’s birthday. It was delicious and not too heavy on the icing at all, which we like. Meli loves to have Cadbury Gems (or M&M’s/ Smarties) spell out the birthday number on the cake. I’ve been doing this since she was a small child and she loves the tradition.

I’ve been making and drinking a lot of cardamom milk tea this January. I find it very soothing to drink during the colder months. Simply boil pierced cardamom pods in water, add strong black tea and gently simmer for about 5 mins on the stove top. Add milk and sugar to taste and then serve.

What I Bought or Received in January

I purchased books for the 8 year old’s birthday, because as she says herself – books make the best presents. The books I gave her were Noel Streatfeild’s ‘Holiday Stories’. I was a bit naughty in that I wanted this beautiful book for myself but I managed to convince my daughter that she would enjoy it too when I mentioned that one of the stories was labeled ‘Chicken for Supper’. As my daughter loves to eat chicken and food in general, she didn’t need much convincing after that! The second book we gave her for her birthday was a Full Colour Edition of Laura Ingalls Wilder’s ‘By The Shores of Silver Lake’. There was also another old book find – to add to the Famous Five collection. She also received a splendid illustrated edition of ‘The Goblet of Fire’ by J.K. Rowling from a generous uncle.

Books I bought for myself included a second hand copy of E.H. Young’s ‘William’ and two Girls Gone By Publishing stories – ‘Highland Holiday’ by Jane Shaw and ‘Refuge for the Chalet School’ by Amy Fletcher.

Posts I Published in January 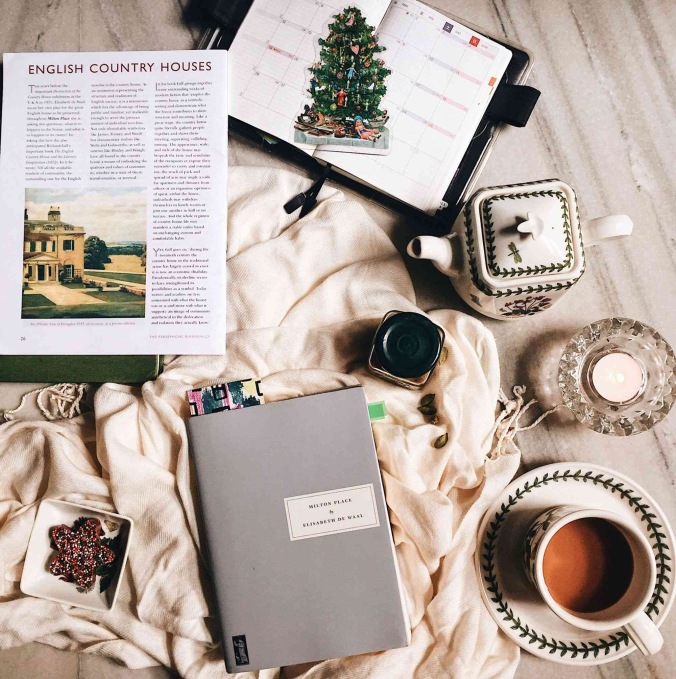 I regained my blogging mojo in January and published a few posts that I’ve listed below:

6 Tips to Overcome the Post-Christmas Blues

The Highpoint of the Month

I received a wondrous package from two dear Instagram friends – Kathy (kstarnes on Instagram) and Shelbi (the nobbylife on Instagram). I spent a whole afternoon opening the parcel and enjoying its contents while sipping on a cup of tea. The wrapping was so pretty that I had to take a flat-lay photograph to share. The books are highly coveted vintage editions of O. Douglas – out of print and hard to find. I love them so much. I feel very grateful to have such considerate friends.

Favourite Book Excerpt of the Month

“I think it will last,” said Grandfather. “In my experience when people once begin to read they go on. They begin because they think they ought to and they go on because they must. Yes. They find it widens life. We’re all greedy for life, you know, and our short span of existence can’t give us all that we hunger for, the time is too short and our capacity not large enough. But in books we experience all life vicariously.”

~ ‘A City of Bells’ by Elizabeth Goudge