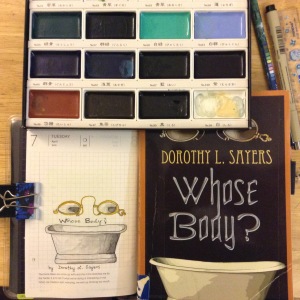 Short Synopsis of the Story:  The body of a man is discovered in the bathtub of a Mr. Thipps, wearing nothing but a pair of pince nez. Nobody knows anything about the identity of the man and even less about how he came to be in Mr. Thipp’s bathtub.On the same day that the body is discovered Sir Reuben Levy, a wealthy  financier goes mysteriously missing. Could the two incidents be connected? Lord Peter Wimsey puts his wits to the test in order to get to the bottom of the question, aided by Parker and his faithful butler Bunter.

Thoughts About the Book: I’m a great enthusiast of the mystery novel genre especially books that hail from the ‘Golden Age’ of detective fiction. It seemed natural that I should look towards the works of one of the stalwarts of the genre – Dorothy L Sayers herself. Initially I found the character of Peter Wimsey delightful but a tad superficial. He reminded me a little of Bertie Wooster with all the hallmarks of the English aristocracy. In the opening page, Sayer’s quirkily and memorably describes Wimsey’s appearance as follows:

His long, amiable face looked as if it had generated spontaneously from his top hat, as white maggots breed from Gorgonzola.

Lord Peter lives in a block of new expensive flats opposite Green Park, dines at the Club, buys expensive rare antiquarian books, plays the piano, keeps a butler and dabbles in detective work in his spare time to amuse himself. However, as the story progresses and more details of Wimsey’s character become apparent we start to gain a greater understanding for his actions and motivation in his life. Wimsey has a great regard and respect for his butler Bunter. We learn that they both were comrades in the Great War. Bunter is therefore privy to Wimsey’s weaknesses, especially his nightmares that are the result of shell shock during the war.

Wimsey is highly conscientious. When he finds himself deeply embroiled in the mystery, he confides in Parker-

“That’s what I’m ashamed of, really,” said Lord Peter.”It is a game to me, to begin with, and I go on cheerfully, and then suddenly see that somebody is going to be hurt, and I want to get out of it.”

The ever jocular Peter Wimsey responds –

“I don’t think you ought to read so much theology,” said Lord Peter.”It has a brutalizing influence.”

Conclusion: Its very difficult to write a review of a mystery story without giving something away but I will say that Sayer’s presents an intelligent plot in this mystery novel. What sets Sayers apart from others is the depth of her intelligence. This is evident in her wit and her ability to humanize a character. By the end of the novel not only do we start to respect Lord Peter Wimsey but we are also eager to learn more about his character and all his future detective endeavors. A great start to a detective series.

2 thoughts on “Whose Body by Dorothy L. Sayers”